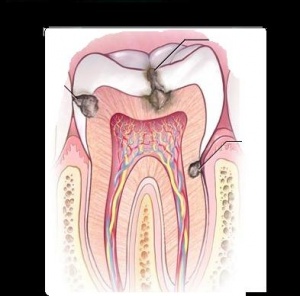 You’ve probably heard all sorts of horror stories about sugar. It packs on weight; it’s bad for your teeth; it causes health problems. And you know what? They’re all true. Okay, most people like to have a little sugar in their diet. After all, a spoonful of it makes the medicine go down, right? Remember though … that’s a spoonful of sugar. But do you know how many spoonfuls of sugar there are in just one can of non-diet soda? Are you ready for this? The answer is … ten! That’s right, there are ten teaspoons of sugar in every single 12-ounce can of soda! Recent studies show that the average American teenager drinks upwards of a can and a half cans of soda per day. That equals the consumption of more than four pounds of sugar per month in soda alone! And all that sugar is wreaking havoc on teeth.

Bacteria loves sugar. It’s like, well, candy to them! All those bacteria teeming around in your mouth are living for the next moment you send some sugar or other junk foods their way. And bacteria in your mouth descend upon those sugary foods, well, as your grandma used to say, like they’re going out of style! The biggest problem with that? It’s not going out of style. In fact, sugar and junk food are very in style. They’re bigger and junkier than ever, and all that bacteria swimming around your mouth are destroying your teeth.

Bacteria creates acid that eats away at tooth enamel, and that’s what causes cavities. Studies have shown that acid that’s formed by bacteria lasts for about 20 minutes in your mouth. And every single time you take another sip of that soda, you’re starting that enamel attack all over again. But it’s not just limited to soda. Sugary candies, cakes, gums, and starchy foods also create that same nasty bacteria that converts to acid and then launches its attack on your teeth. So what can you do about all those nasty side effects that are caused by soda and other junk foods? The first and most obvious step is to avoid or even eliminate soda and its sugary sidekicks like cakes and candies. But there are further steps you can take to stop, and possibly even reverse, the destruction that may be happening right now to your teeth that’s caused by poor nutrition.

1) Top dentists in Clearwater recommend snacking on healthy fruits and vegetables, especially crunchy raw vegetables, instead of on sugary and starchy foods. Fruits and vegetables that contain a high water content are much better for your teeth because they keep your mouth hydrated. These include foods such as watermelon, celery, and cucumbers. Surprisingly, even various cheeses such as cheddar and Swiss are better because they cause saliva creation. Dentists also suggest limiting sticky foods, even if they’re healthy, such as raisins, bananas, oatmeal, and peanut butter. If you do consume sticky foods, brush your teeth as soon as you’re finished eating.

2) Family dentists in Clearwater recommend serving sugary foods as dessert with a meal rather than as a snack. The reason for this is that saliva is already being produced during a meal, especially if you drink a beverage such as water with that meal.

3) Avoid sugary and sticky foods that linger on your teeth. These include mints, hard candies, and lollipops. Even cough drops that contain sugar are bad for your teeth because that sugar hangs around on your teeth long after you’re finished with it.

5) Regular dental visits are a must, especially if you have a ‘sweet tooth.’ Of course, you should avoid sugary foods as much as possible, but whether you’re a health food nut or a junk food junkie, you need to visit a top dentist twice a year. Those individuals with a greater risk of oral diseases such as oral cancer should see their dentists more than twice a year. High risk groups include (but are not limited to) tobacco users, smokeless tobacco users, excessive drinkers, those with a family history of oral diseases, individuals on chronic medications that cause dry mouth, and those with diabetes and gum disease. Talk to your family dentist for more information to determine how many dental visits you should schedule per year.

Sugar is quite possibly your teeth’s worst enemy. It’s the main source of cavities, and it doesn’t stop there. Sugar causes teeth to discolor, decay, and ultimately fall out. Dentures used to be for the elderly, but today’s teens especially are in danger of losing their teeth long before they reach their golden years, and it’s mostly because of sugar and bad nutrition. Contact a top dentist in your area of Florida for more information on how you can minimize or even reverse the damage that’s already been caused to your teeth by sugar. End the destruction that soda and bad nutrition are doing to your teeth, and your teeth can last a lifetime.