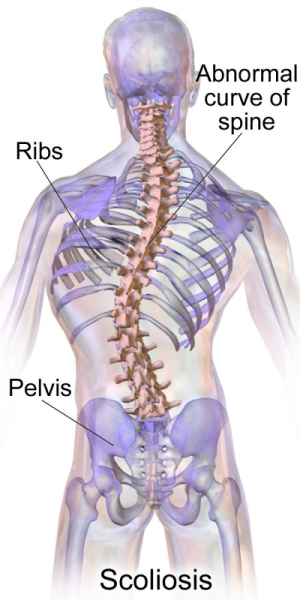 Scoliosis is a condition in which the spine curves abnormally. In most cases, scoliosis can be mild and does not require serious treatments. The spine is made up of 33 segments called vertebrae, arranged in a long, vertical column and are cushioned and separated by intervertebral discs. The natural curve of the spine allows people to move, balance, and walk normally. But when a person has scoliosis, the involved vertebrae rotate and cause the spine to curve sideways.

Scoliosis usually develops gradually over time. The condition commonly affects the vertebrae in the middle back or the lower back. The vertebrae in the neck are rarely affected by scoliosis. In some cases, a second curve develops in the opposite direction to compensate for the abnormal spine curve. When this happens, the spine takes on an “S” type shape.

Scoliosis can occur at any age, and among the sub-classifications used to describe the condition is the age of onset, which can include infantile, juvenile, adolescent, and adult scoliosis. Pinpointing a precise cuase isn’t always the easiest task.  About 15% of cases of scoliosis are congenital, which means that it occurs during fetal development for a variety of reasons. At least 10% are linked to multifactorial disorders, resulting from a combination of influences including genetic and environmental factors.

Fortunately, the majority of scoliosis cases are mild, rarely impacting body mobility and function. In fact, nearly 90% of individuals diagnosed with idiopathic scoliosis do not require any type of surgery. Nonetheless, it can cause some severe skeletal deformities that can compromise one’s health and mobility.

The location of the curve can also affact how the condition progresses. Curves in the lower back are less likely to intensify than the upper back. The curve size during childhood is also an indicator of any future progression; the larger the curve, the more likely it will increase. Additionally, C-shaped curves are less likely to result in medical complications than S-shaped curves.

Many people may alreadyhave mild scoliosis without being completely aware of it. Telltale signs can include uneven hips, waist, or shoulders, a rib cage being higher on one side than the other, and uneven shoulder blades.

Does Scoliosis Surgery Require Breaking of the Spine?

Scoliosis patients who need surgery have many questions about the procedure, but the most frequent question orthopedic spine surgeons hear is: “will my spine be broken during scoliosis surgery?”. If you are curious about scoliosis surgery, the first thing to keep in mind is that a surgical operation is not necessary for most people that have scoliosis. A variety of other treatment options are available, including physical therapy, stretching and exercising, postural changes, or wearing a back brace in some cases. For some people, these treatments will not achieve their desired results, or the condition will continue to progress. Surgery can provide a treatment option in many cases like these. The goal of surgery is to reverse the lateral curve of the spine to an extent, while also addressing any back pain or heart or lung function problems that are caused by scoliosis. The surgery is carefully planned based on the number, position, and severity of the curve, the age of the patient, and other factors. Young patients with congenital scoliosis may exhibit other developmental abnormalities that must be considered during treatment.

As for the surgery itself and what happens to the spine, it is not broken during surgery for scoliosis. What does happen during surgery is that the surgeon performs a procedure called spinal fusion. It uses implant devices as well as bone grafts to provide strength to the spine where the vertebrae have been compromised. This provides long-term stability and prevents the individual vertebrae from moving further out of position. Today, surgery can be performed with minimally invasive techniques. The incisions are small and the instruments and work are performed through narrow catheters. So not only the surgery will not break your back, but the procedure also barely leaves a scar.

When is the Right Time to Consider Scoliosis Surgery?

To better understand the treatment options for scoliosis, one must first understand the different causes of scoliosis. The broad categories of scoliosis include idiopathic, congenital, and neuromuscular, which are most often diagnosed in childhood, and degenerative, which is often diagnosed in adulthood. These are different considerations for children, adolescents, and adults as to whether to consider scoliosis surgery; every curve is different!

For children and adolescents, the reason to perform surgery is typically to prevent further progression. ‘Idiopatic scoliosis’ is the most common form seen in children and adolescents. The curves tend to increase in size the most during a growth spurt. Therefore, if a curve measures a certain size before a patient has finished puberty, they might be considered for surgery. Medium sized curves are typically considered for a brace if a patient is still growing. If the curve is in the thoracic spine, then surgery is a consideration when the curve measures 45 degrees on x-rays. However, between 45 and 55 degrees, it remains unclear as to whether the risk of progression is great enough to warrant surgical management. When a curve measures 55 degrees, there is more concern that the curve will further increase after growth, based on previous studies of many patients with scoliosis. Therefore, surgery will typically be recommended in this population of patients. However, even then, it comes down to the patient and family choice, as there are patients with larger curves not treated with operations or surgery who are asymptomatic even as they become elderly.

‘Congenital’ scoliosis means that the curve is because of abnormalities in the spine that are present in early childhood. There are a variety of abnormalities within the spine that can cause it to become curved. Depending on the type, these can have a high likelihood of progression, so surgery is often performed at a younger age to prevent a rapid increase in the curve. It is critical to know that these abnormalities are rare, and typically they can be seen on an x-ray screening.

Neuromuscular scoliosis is due to another disorder, which includes cerebral palsy, Duchenne’s muscular dystrophy, and Spina Bifida. Like congenital scoliosis, the curves can develop at an earlier age and have a rapid rate of progression. However, the benefits of surgery must be weighed against the risks to the patient given the underlying disease. Managing these patients surgically requires careful coordination of a whole team of pediatric providers to ensure the best outcome.

In adults, surgical management is more commonly undertaken to manage symptoms. Symptoms in adults can include back muscle pain or small spine joints due to deformity and arthritic changes as well as neurologic symptoms such as nerve pain or weakness due to compression of the nerves. These symptoms can occur either in patients with idiopathic scoliosis that did not have surgery in adolescence or in patients with scoliosis that has developed with time due to arthritic changes.

If the patient has worsening weakness in the legs due to arthritic changes causing pressure on the nerves within the lower back, you should consider surgical management. This can include a fusion procedure, or at times it can include a smaller decompression procedure, performed cautiously to try and avoid worsening the curve. Otherwise, if the primary symptoms are due to nerve pain alone, other treatments can be undertaken such as medical management or epidural injections. Muscular-based back pain is best treated with therapy exercises aimed at strengthening the stabilizing musculature; there are even specific therapy regimens for scoliosis patients such as the Schroth method.

One additional indication for surgical management is the progression of curves seen in multiple x-rays to evaluate the size of the curve. If there is a significant progression with time, surgery may be recommended to stave off further progression. Particularly in post-menopausal women, it is critical to maintain one’s bone density because it can increase the likelihood of a curve getting bigger as they become an adult.

For those who do not have a declining neurologic function, the ideal time for surgery is when the symptoms are severe enough so as to impact activities of daily living, outweighing the downsides of extensive surgery and potential for complications. It is best to speak with a surgeon who is used to working with patients with scoliosis if one is considering surgical management; there are specific surgeons who treat patients with spinal deformities. It can be helpful to have knowledge of exactly what to expect in the recovery period after surgery; many patients have written blogs documenting their experience. There is more detailed information in the book “Scoliosis Surgery: The Definitive Patient’s Reference,” written by a scoliosis patient who underwent surgical management.

In the end, the best time for surgery is when you feel ready to undergo a spinal surgery after a full discussion with a medical provider. Many patients can successfully manage scoliosis without surgery, but for those who end up undergoing surgery, it is important to fully understand what to expect.