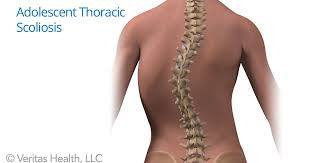 While scoliosis is typically thought of as an S-shaped curve seen when looking at someone from behind, when it develops during growth, it actually involves abnormal rotation of the vertebrae. For this reason, there is a frequent rotation of the ribs, leading to what is called a “rib hump”.

In most young people there is no specific cause for their scoliosis; it is therefore called “idiopathic”, meaning there is no specific known cause. It is most commonly seen in adolescents ages 10 to 12 and into the early teens when children’s bodies are growing rapidly. Usually, either a pediatrician or a school screening will identify a suspected spinal curve, at which point they can have a further evaluation from a spine provider, be it a spinal surgeon or a pediatric orthopedist with that expertise.

It can be a surprise to some to find out that scoliosis can run in families, which means that if a child has a parent or sibling with idiopathic scoliosis, the child’s odds of developing scoliosis are increased. In these patients, a pediatrician may watch that child’s spine more carefully for a developing curve.

Scoliosis a form of Spinal Deformity

Scoliosis is a spinal malformation characterized by an abnormal sideways, or lateral curvature of the spine. It is one of the most common forms of spinal deformity, affecting about two to four percent of the population. But the majority of people affected show no noticeable symptoms of scoliosis, and the condition may go undetected for years.

How is Scoliosis Evaluated?

The doctor will first take a medical and family history to check if there could be other causes for the young person’s scoliosis or confirm that they have idiopathic scoliosis. The doctor will then do a physical exam to check if all the nerves are functioning correctly. Occasionally, there may be findings in the exam that will require further evaluation. The doctor will take an x-ray of the spine to measure the degree of the spinal curve and look for any additional problems such as a difference in leg lengths that may be affecting the spine. At times, the curve may be seen to be relatively small on x-rays; in these cases, the person is not diagnosed with scoliosis, but instead diagnosed as having a “mild spinal curve” that does not necessarily need to be followed over time.

A spine physician may also check x-rays in which the patient bends to each side to determine how much the curve straightens out. This gives further information as to how stiff the curve is. Based on all this information, the doctor will then create a treatment plan, depending on where the spine curve is located and its size.

What are the Treatments for Scoliosis?

Treatment not only depends on the size and location of the curve in the spine but also depends on the age of the patient, and, most importantly, whether the person is still growing or not. Typically, once a young person is finished growing, the curve will stay the same size and usually will not get any bigger.

If the curve is small and the patient is still growing, the treatment is usually to observe the curve over time. The person will typically come in for a checkup every 6 to 12 months for a physical exam and x-rays to see if the curve is getting any bigger.

The spinal surgeon may recommend that the patient wears a back brace designed to stabilize scoliosis. It is critical to remember that the goal of bracing is NOT to make the curve smaller, but instead to keep it from getting bigger. A back brace may be used when the curve is medium-sized or has grown bigger in a relatively short period of time. A brace is only useful when the patient is still growing, as the goal is to further guide the spine’s growth.

In some situations such as a large curve, surgery to correct scoliosis may be recommended by your spinal surgeon. This involves getting the bones of the spine to heal together over a portion of the curvature. While the primary goal is to fuse the bones together such that the curve does not worsen, often the curve can be decreased to some degree. In a young patient with a lot of growth yet, the decision may be to wait until the patient is a bit older, since fusing a portion of the spine that the portion will not be able to grow anymore. To keep the bones in place, metal is placed within the spine, typically consisting of rods and either screws or hooks that attach to the bone. These generally stay in the spine even after the bones heal together.

Some adults may have idiopathic scoliosis that did not require treatment when they were young but can cause issues as they age. Particularly in women, weakening of the bones with age may lead to worsening of a curve that has been the same size for years. Any adult with scoliosis who thinks that it may be worsening with time should see a spinal provider to further evaluate it. Lifestyle changes to strengthen the muscles of the back or checking the strength of the bones in the spine, such as measuring the density of the bone, may be important to maximize the health of the spine.

Adult patients with a history of scoliosis may also develop nerve symptoms as they age such as tingling in the legs; this can also be further evaluated by a spine surgeon to see whether it could be due to the curve in the spine. If these symptoms are due to a curve in the spine, there are multiple options short of surgery such as therapy, medications, or injections which can help. A spine provider is the best resource to figure out which of these options will be the best for an adult with symptomatic spinal curve to get them back on their feet and back to full function!

Scoliosis Surgery Can be used to Treat an Abnormal Spinal Curvature

Scoliosis surgery is a surgical operation performed to treat the abnormal lateral, or sideways curvature of the spine that is the hallmark of scoliosis. Viewed from the front or rear, a normal spine appears to be straight. When a person with scoliosis is viewed from the front or rear, the spine appears to be curved. Scoliosis is highly variable in its severity. Individuals with spinal curves greater than 40 to 50 degrees are often considered candidates for scoliosis surgery. While surgery will not perfectly straighten the spine, the goal is to ensure the curve does not progress. During surgery for scoliosis, vertebrae are fused together (referred to a spinal fusion), so the spine cannot bend. The process is similar to what occurs when the broken pieces of a bone heal to each other. 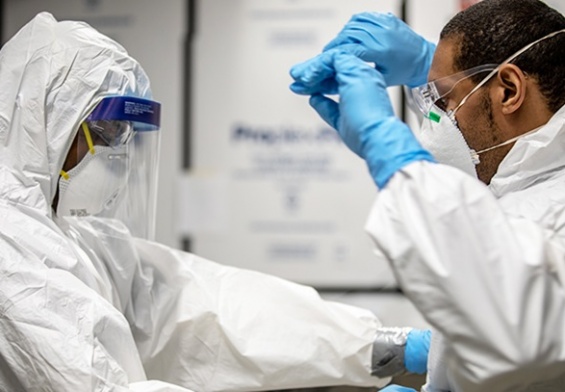 What Will Normal Look Like for Medical Professionals After Coronavirus?