Most people know it as ‘heartburn,’ but the medical term for it is gastroesophageal reflux disease (GERD). GERD is a chronic digestive disorder characterized by the backflow of stomach acids into the esophagus, which can cause irritation of the esophageal lining. Most of us have had heartburn at least once or twice in our lives. We know it as the painful, burning feeling in the throat and/or chest, and we likely even know what we’ve eaten that caused it. But if you’re someone who suffers from chronic heartburn, what you’re experiencing could be the chronic gastrointestinal disorder GERD, and the complications of this reflux can be more severe than belching or a little pain now and again. Chronic gastroesophageal reflux is a disease characterized by acid backing up through the esophagus that can lead to dry cough, hiccups, and much more severe throat and chest pain than what is experienced by occasional heartburn. GERD can lead to serious health problems such as difficulty swallowing and even food sticking. That’s why GERD treatment in Queens and around the country is so important.

GERD—gastroesophageal reflux disease—is a digestive disorder. It’s a chronic disease that involves the stomach acids ‘refluxing’ back up into the esophagus. This reflux causes esophageal lining irritation that can be quite painful. This is how it works—when you swallow, it causes the lower part of your esophagus to open in order to allow the food and beverages you consume to flow into the stomach and close. When acid reflux—known more commonly as heartburn—happens, it can cause weakening of the esophagus. The problem occurs when this refluxing of foods and liquids you consume occur often, potentially leading to severe weakening of the esophagus. It’s that chronic recurrence of reflux back up into the esophagus that damages the esophageal lining, making it difficult for this important organ to open and close properly. Additionally, esophagitis can occur, which is the inflammation of the esophagus that can lead to esophageal erosion and bleeding.

Poor eating habits are one of the major factors in the cause of GERD. Spicy or fatty foods, particularly when they are consumed regularly, can lead to irritation of the esophagus. Over consumption of alcohol, caffeine, or carbonated beverages can also lead to GERD. Smoking is another of the major causes of GERD. Other factors can include pregnancy, hiatal hernia, diabetes, dry mouth, and delayed stomach emptying. Other serious complications can include esophageal ulcers and ‘Barrett’s esophagus,’ which is a very serious precancerous esophageal condition. 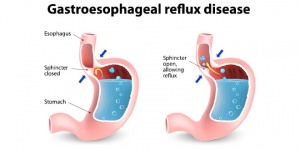 How to treat GERD

GERD treatment in Queens and throughout the country often begins with counsel to the patient in avoiding foods that cause heartburn. Such foods often are referred to as ‘trigger foods.’ They are the foods and beverages a patient tends to eat or drink that lead to the heartburn discomfort or pain they are experiencing. A GI doctor also may prescribe medication that can be effective in treating the symptoms of GERD. If your symptoms do not diminish when you change your diet, certain medications can be included in your treatment regimen that will help to alleviate the symptoms of GERD. If changes to your diet and adding prescription medications don’t help to alleviate your symptoms, an endoscopy may be necessary. In this procedure, your GI doctor will be able to see inside your esophagus, stomach lining, and small intestine in order to better visualize the extent of the effects of GERD in these organs, including the possibility of inflammation, hiatal hernia, ulcer, esophageal narrowing, or perhaps even cancer.

As Americans, many of us just don’t eat the nutritional diet our parents or grandparents did. It’s that poor diet, with its processed, spicy, or fatty foods, alcohol, caffeine, and refined sugars—all foods that contain little nutritional value—that puts us at great risk of suffering from such gastrointestinal diseases as GERD. Combine that with our busy schedules that can lead to poor eating habits and stress, and you’ve got a recipe for disaster. If you’re a chronic heartburn sufferer, you may have gastroesophageal reflux disease that needs to be assessed by a GI doctor and treated before it leads to severe health problems. Type ‘gastroenterologist near me’ into your Internet browser to find a specialist in your area who can properly diagnose and treat your GERD symptoms before they worsen.