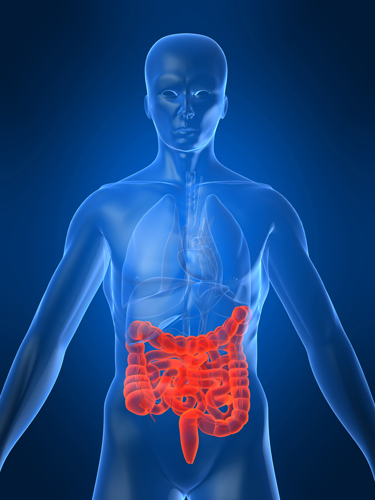 Symptoms of Crohn’s disease can differ from one patient to another, often depending on its location. Most commonly, patients suffering with Crohn’s disease are affected in the last part of the small intestine, or ileum, and the colon. These become inflamed and cause symptoms such as pain and bloating. Inflammation can occur at the bowel wall which causes scarring, or it can spread through the bowel wall. The symptoms associated with Crohn’s disease are abdominal pain and cramping; diarrhea, at times severe; bloody stools due to food moving through the digestive tract, causing inflamed tissue to bleed; open sores, or ulcers, on the surface of the intestine that cause pain; and reduced appetite and weight loss. Because the inflammation caused by Crohn’s disease can affect appetite, it can also cause malabsorption of vital nutrients. In more severe cases of Crohn’s disease, other medical problems can occur, such as fever, arthritis, eye inflammation, skin disorders, liver or bile duct inflammation, and mouth sores.

One of the major risk factors of Crohn’s disease is age. It may surprise you to know that people are most likely to develop Crohn’s at a young age, with most patients being diagnosed before they reach 30 years of age. As with many diseases, heredity is also a risk factor. If you’ve had a close relative such as a parent or sibling who has been diagnosed with Crohn’s disease, your risk of developing it is higher. It is estimated that as many as one person in five people suffering with Crohn’s disease has a family member who’s been diagnosed with it. Geographical location also can be a risk factor. Those who live in urban or industrialized areas, because they tend to eat diets high in processed or fatty foods, are often at a higher risk. Smoking is considered the most controllable risk factor for Crohn’s disease.

If you suffer from any of these symptoms, it is important to make an appointment with a qualified GI doctor for testing and treatment. While there is no known cure, many people with Crohn’s disease are able to function well, often due to treatments that reduce the inflammation that can cause pain and other symptoms. These treatments can limit further complications from the disease and can even bring long-term remission. Medical treatments of Crohn’s disease usually involve drug therapy or, in more severe cases, can include surgery.

It is vital that you see a GI doctor when you notice the symptoms of Crohn’s disease, including abdominal pain, bloody stools, unexplained fever that lasts longer than a day or two, and diarrhea that does not respond to over-the-counter medications. In some cases, your GI doctor may recommend a colon cancer screening and routine screenings in the future to prevent further complications from your Crohn’s disease. Every patient suffering from Crohn’s disease is different, and varying therapies may be recommended by your GI doctor. A number of anti-inflammatory drugs exist that are often the first step in relieving symptoms. These drugs include sulfasalazine, corticosteroids, and immune system suppressors. Some patients who are reluctant to try drug therapies may be more willing to try alternative treatments such as probiotics and fish oil. According to the New England Journal of Medicine, patients in a study who were given fish oil were found to be less likely to relapse. Your doctor may even recommend a combination of drug and supplemental therapies to help alleviate the pain and symptoms of Crohn’s disease. Talk to a GI doctor in Flushing to discuss which therapies would work best for you.

What is an eCTD?

How to Prevent Colon Cancer