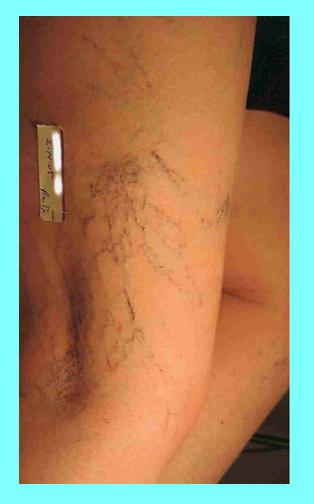 I know my spider veins are ugly, but there really isn’t anything I can do about them. This is a sentiment shared by millions of people throughout the country who have spider veins, but the fact is that those who suffer from spider veins do have options when it comes to treating them. Spider veins are those reddish purple veins that typically are found on legs, but they can occur in other areas of the body. Also referred to as telangiectasia, spider veins are tiny dilated blood vessels that occur near the surface of the skin. It is true that, due to the pressure legs withstand, spider veins typically show up on the legs. However, spider veins can also appear on other areas of the body such as the face. They are so named because of the web-liked appearance they often take, but don’t mistake spider veins for varicose veins. Varicose veins are also web-liked, purplish veins, but these are more serious, as they occur deeper under the skin. The good news is that spider veins don’t present nearly the threat that varicose veins do, and the symptoms are few. Of course, that doesn’t mean that those who have them want to keep them around. Following is more information about spider veins and spider vein treatment in Summit.

As the heart pumps blood, it’s necessary for that blood to move properly through veins and blood vessels in order to get to all the parts of the body where it needs to go. If valves become weakened, blood can pool and become stagnant in veins. The most significant symptom of spider veins is their appearance. Spider veins don’t typically bring about a lot of symptoms other than the reddish-purple, webbed, sometimes sunburst patterns of veins that appear on the skin. They can sometimes also bring about some leg swelling or pain, but spider veins shouldn’t be confused with varicose veins. While spider veins show up near the surface of the skin, varicose veins go deeper. Varicose veins also are more rope-like and bulging than spider veins.

The best news about spider veins, other than the fact that they are often harmless and bring about no other symptoms, is that there are a number of treatments for them, including compression stockings, phlebectomy, and sclerotherapy.

Compression stockings, also called compression hose or support hose, are usually the first go-to treatment for spider veins. Compression stockings sometimes are enough to get blood flowing properly in order to keep it from pooling in the legs and ankles. These stockings work by applying pressure to affected legs and ankles, as they provide the most pressure around the ankles and less pressure as they go up the leg. And it’s that pressure that helps to redirect pooling blood up the leg and back toward the heart.

A fairly minimally invasive surgical procedure, phlebectomy is effective at treating spider veins. It’s generally performed under local anesthesia, often is performed in a vein treatment center, and typically is pain-free. In this procedure, veins are marked for elimination, as local anesthesia is injected into affected areas for numbing. Then spider veins are surgically removed one section at a time through tiny incisions.

Sclerotherapy oftentimes is performed on an outpatient basis and can be performed in a vein treatment center. In this procedure, a solution, or ‘sclerosing agent,’ will be injected into spider veins in order to close them off and seal them shut. This procedure also leads to redirection of pooling blood to healthier veins. It causes affected veins to harden, fade, and disappear.

Even though spider veins typically are superficial and they’re not usually dangerous, especially when compared to their ugly cousin varicose veins, millions of folks who have them want nothing more than to get rid of them. The symptoms of spider veins are insignificant, but the unattractiveness isn’t. If you’re a spider vein sufferer who is wondering what your treatment options are, now you know a little more about spider vein treatment. For more information, contact a vein center to schedule a consultation and have all your questions about spider vein treatment answered.

What Is Gum Recession?