What is Flap Reconstruction?

What is Flap Reconstruction? 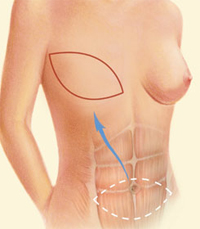 Flap reconstruction is typically a way to rebuild a breast into a desired shape using muscle, skin and fat from another section of the body. Many times it is done as part of a breast reconstruction which must be performed after a mastectomy. But it can also be done for those women who have had problems with normal breast development. Another term for tissue flap surgery is “autologous” which simply means that the tissue used in the reconstructive surgery comes from the person’s body and not another source.  In most cases, breast reconstruction surgery will require more than a single operation. The first part of the surgery can be done at the same time a mastectomy is performed, but it can also be done as a separate procedure. The areola and nipple are usually created later on.

Who can do the flap reconstruction surgery?

Tissue flap surgery is performed by a certified plastic surgeon. Many times the surgeon who completes the mastectomy can make a referral to a qualified plastic surgeon that has special training in breast reconstruction. Before the mastectomy is performed, you will likely meet with the plastic surgeon to discuss your options and which procedures might be the best option for your particular situation. He will probably share several photos demonstrating the results, both favorable and unfavorable, of what can happen during a flap reconstruction.

There are two basic ways that a flap reconstruction surgery can be done. In a pedicle flap, the tissue from either the back or belly is moved to the area of the chest without severing it from its original supply of blood. The tissue is simply pulled up under the skin to the breast area and attached into place. A free flap procedure is completed by removing the flap of tissue from its original location. The blood vessels and tissue are cut in the process and then when it is in place in the chest the plastic surgeon will attach blood vessels.

There are 4 different types of flap reconstruction surgeries. TRAM is the most common of all the types of flap surgeries. This is where tissue and muscle is moved from the lower abdomen into the chest area. It can be completed as a pedicle flap or a free flap surgery. An LD flap is a form of pedicle flap surgery. It will move fat, skin and muscle from the upper back into the area of the chest to rebuild the breast. Sometimes women elect to have an implant placed during this surgery to help enlarge the breasts. A DIEP flap surgery is very similar to the TRAM in that the plastic surgeon will use skin and fat from the lower abdomen but they do not include any muscle in the breast reconstruction. A Gluteal free flap will use muscles, skin and fat taken from the buttocks to form a new breast. This type of breast reconstruction is ideal for thinner women who may not have any excess belly tissue to use for the reconstruction.

In most cases, women are very satisfied with the results of a flap reconstruction surgery. Even though the surgery and recovery times are longer than a simple implant, the result is a much more natural looking breast. Breast reconstruction cannot totally restore feeling to the area of the breasts, but some of the feeling may return in time. The risks of a breast reconstruction are the same as those associated with any surgery. Other risks may be the death of tissue if the blood supply is not restored; which will need further surgery; ongoing discomfort or pain in the breast. Muscle weakness in the area from which the muscle was taken can occur.